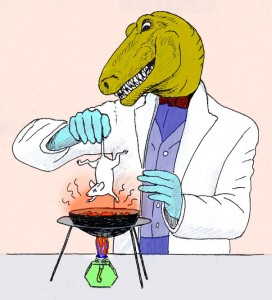 The European Commission estimates that the overall financial burden arising from the deleterious effects on human health due to the 100,000 synthetic chemicals in our environment will amount to 52 billion euros. Although the aim of REACH

is to avoid this catastrophic scenario, the ultimate outcome will depend on the accuracy and robustness of the test methods used in this programme. The fact that animal tests are a major component of REACH does not inspire confidence and is indeed a cause for concern.

To rely on crude animal data in an era of modern toxicology simply does not make sense. Huge advances have taken place over the last two decades, giving birth to the new science of toxicogenomics — the marriage of molecular toxicology and bioinformatics — which allows thousands of chemicals to be tested in a matter of hours or days, rather than the months or years associated with traditional animal experiments. In addition, the biological material used in toxicogenomic studies is derived from cell cultures of human origin. This makes the data obtained all the more relevant to the species in question — human beings.

The European Commission estimates that it will cost 2.8 – 3.6 billion euros in order to test just 12,000 chemicals.

Antidote Europe estimates that 1.5 billion euros would be sufficient to establish a European Centre for toxicogenomics in which to test the 100,000 chemicals considered to be in our environment. An added incentive is that the cost of testing would be shared primarily among EU member states and not by industry alone.

According to the European Commission, it would take several decades to test 12,000 chemicals. The US National Toxicology Program estimates that three years of animal testing are required in order to evaluate one single chemical.

In contrast, Antidote Europe estimates that it would take two years in order to evaluate 100,000 chemicals, using toxicogenomics. This is because 1,000 substances can be tested simultaneously and no chemical would require more than one week to evaluate.

BioTeSys (Germany), Scienion (Germany), and Vigilent Technologies (France) are examples of three European enterprises that share a novel approach to toxicogenomics. This technological advantage potentially places the EU ahead of its US and Japanese counterparts, with respect to patent applications.

The adoption of toxicogenomics within REACH will eliminate the need for animal testing.

All of the above clearly supports the establishment of a European Centre for toxicogenomics, with the following associated benefits:

Is REACH a pointless animal massacre?

AE Articles, For a strong R.E.A.CH.

REACH, the European Community Regulation on chemicals, is an apology to society for the thousands of poorly-tested industrial chemicals that now pervade the environment and our bodies. But REACH regulations still allow traditional unquestioned animal experiments. This article serves two purposes. It is a compte-rendu of the conference presented in Vannes on 21 June 2008 by AndrÃ©… Read more

At its coming into force, the European REACH regulation on chemical substances implies toxicity tests of which the reliability has never been proved, qualified of “simply bad science” by a scientific responsible of the European Commission and longer and more expensive than modern and reliable tests already available.  The European REACH regulations on chemical substances came into force last… Read more