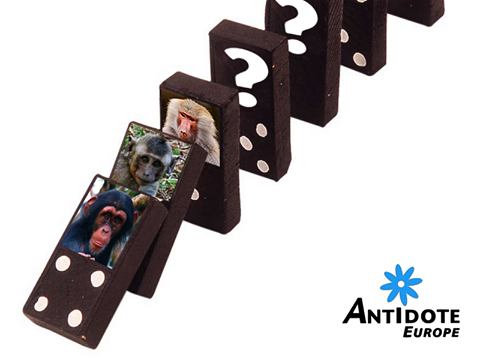 A recently published article by a team of scientists in Denmark (1) suggests that animal research is undergoing a « domino effect ». The domino effect refers to the knock-on effect of replacing one species of animal by a different species. largely on the basis of strong public opinion.  In this example, Danish scientists chose to use pigs instead of monkeys because they consider pig experiments to be less controversial.

The « domino effect » kicked off on 18 November 2015, when Francis Collins, director of the US National Institutes of Health, announced that his organisation « will no longer fund biomedical research on chimpanzees » (2). The decision to stop funding chimpanzee research was based on public opinion as well as on scientific opinion. After the chimpanzee, the closest animal to humans is the monkey. However, there are already strong indications that public opinion will not tolerate monkey research for much longer. For example, the University of Radboud in the Netherlands recently announced that it would end all primate research in 2017 (3).

Animal researchers in Denmark have seen the writing on the wall and are preparing the pig as a replacement for monkeys. It should be obvious that this decision is not based on science but rather, on fear of public opinion. Humans and monkeys are separated by 25 million years of evolution, which helps to explain why monkeys are genetically so different from people. However, humans and pigs are separated by about 80 million years of evolution.
Instead of continuing to waste valuable resources and animal lives, scientists should focus their attention on human based research methods that are directly applicable to people. This is especially true in the age of the human genome. Society is finally waking up to the fact that billions of euros and millions of animal lives have not provided the hoped-for and much needed answers to important questions of human health and disease. The scientific research community would do well to heed the writing on the wall before the « domino effect » is overtaken by a much more powerful « tsunami » of public opinion.