People are not 70kg rats 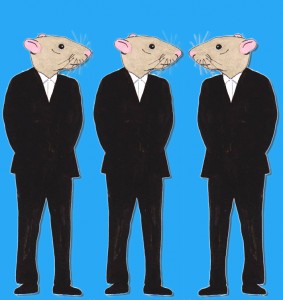 The optimum time to get a new drug on to the market from its discovery to its sale is 12 years, at a cost of around 500 million euros. The clinical (in human) phase of drug development is by far the most expensive part of the entire process, accounting for 80% of the total cost, while animal testing accounts for around one per cent of the total. For every 100 new compounds that show promise in the laboratory, only one will make it to clinical trials. And for every 10 compounds that enter clinical trials, only one will actually succeed in making it all the way through. This represents an overall success rate of 0.1%.

This enormous failure rate accounts for the modern mantra in drug development and research, to “fail early, fail often.” Ideally, new drug candidates should be screened as early as possible for dangerous properties. However, a major limitation to this strategy is the use of animals and therefore species differences, which result in a failure to predict human response.

Drug development involves more than just animal tests. For example, drugs are tested to study their chemical properties, such as solubility and stability. Their molecular characteristics may also be studied in cell culture (in vitro). Ultimately, however, their toxicity will be evaluated in two different animal species, a rodent (usually a rat) and a non rodent species (usually a dog). These tests are used to determine the minimum lethal dose of the experimental drug. If large amounts of drug are required to produce symptoms of poisoning the drug will probably be considered to have an acceptable safety profile. All of the laboratory data (animal and in vitro) will then be submitted to the regulatory authorities for approval.

The regulatory authorities, such as the Food and Drug Administration (FDA) in the US and the European Medicines Agency (EMA) require that pharmaceutical companies submit data to show that their drugs are safe and that they work. But how this is achieved is largely left in the hands of industry. However, the regulatory framework encourages data submission with which it is familiar. Thus, routine animal data is more readily accepted than newer, non animal methods of research and testing, since the regulatory authorities are less familiar with the latter. This has created an unusual state of affairs where animal data is a legal requirement while data obtained using human cells is only a voluntary requirement.

As mentioned above, pharmaceutical companies must fulfil the regulatory requirement for safety data by submitting the results of toxicity tests in a rodent (e.g. rat) and a non rodent species (e.g. dog). If both animal species tolerate the drug well these data are submitted to the regulatory authority with a view to obtaining permission to proceed to the first human clinical trials. These trials are referred to as phase 1 and involve healthy individuals. However, if one animal species tolerated the drug well while the other did not, the company conducting the tests is allowed ““ indeed obliged ““ to find another animal species so that the rodent and non rodent data are in agreement with respect to drug safety. Thus a mouse can replace a rat and a monkey can be used instead of a dog. The regulatory authorities trust that the company conducting the tests will have chosen the most “appropriate“ animal model for their candidate drug.

Once the phase 1 clinical study is complete, human data will now be available. The drug manufacturer for the first time will be able to compare the human data with the animal toxicity data to see whether they show some correlation to each other. If yes, the same animal species will be chosen for the longer toxicity studies (up to 90 days in rats and one year in dogs). If, however, the animal and human data do not match up, the drug manufacturer will once again look for another animal species and select the one that most closely resembles the human data. So for example, a rat can replace a mouse or vice versa. A dog can be replaced with a monkey. Once an animal species has been selected the toxicity studies are undertaken as described before and the safety data obtained from the rodent and non rodent species is compared to see if they agree.

If the regulatory authorities are satisfied with the animal data the next human phase of the clinical trial will take place. Once the human trials are complete, the drug will be approved for marketing if all goes smoothly. If the drug is intended for women of child bearing age then additional animal tests will be required. This entails the exposure of a pregnant animal (a rat or a rabbit) to the drug. If the drug is able to cross the placental barrier and reach the foetus, it will be considered as dangerous for prescription to pregnant women.

If the above testing strategy sounds more hit-and-miss than sound science, that’s because it is just that. Despite all of the required animal tests, adverse drug reactions are the fourth leading cause of death (after heart disease, cancer and stroke). The biggest cause of drug withdrawal and drug death is liver failure, which is often missed in animal tests.

The situation is not much better for screening drugs for birth defect risk to humans. The same requirements apply today as they did at the time of the thalidomide tragedy in 1960. The reason we see fewer drug induced birth defects today is not because of animal tests but simply because doctors today are far more reluctant to prescribe drugs to pregnant women as a result of the thalidomide disaster. In fact, drug induced birth defects still happen today (e.g. Accutane for skin acne). Unborn children are probably no safer today than they were in 1960.

When it comes to drug safety tests, people are not 70kg rats. It’s time to overhaul our drug safety paradigm and the first step is to remove the requirement for animal tests and replace it with 21st century science.

Autism: where are we heading? Anne Keogh on heart research